skip to main | skip to sidebar

Mike Sowden Made Me Do It


So thank you Candace, and Kash and Mike and the other mystery people Mike said said I should write but who I still don’t actually really believe exist. You all have a special place in my heart. And I will allow you to drag me slowly down with you, to the pit of creative suffering that when it is over unleashes a sense of unimaginable joy and accomplishment (I don’t really believe that, I just said it to make you feel better). I expect copious amounts of tea to be brought to me on a silver platter, and a good recommendation for where I can buy a replacement blanket that is also a jumper. Don’t tell Becky. (The jumper-blanket-thrower outer). Over. And out.
Posted by SoMiraculous at 07:23 2 comments:

Tales From My Crypt

I’d like to thank a man in his 60s who I’ve never spoken to for making me want to write on this blog again. When I had just graduated, I was unemployed and living at my mother’s house. I was going out of my mind with boredom and she was going out of her mind with my incessant talking and inability to tidy up after myself. She kept asking how long exactly it was going to be before I moved out. I told her I was going to finish my novel then get a job. I had a go at this for a while, reached 30,000 words after three months and gave up, tried to finish a non-fiction project instead, reached 30,000 words and gave up. But all the time I was starting projects and stopping them, I wrote this blog. Like a sort of column that nobody really read. Writing about the small observations I had from time to time about people and things kept me sane.

Yesterday, I was sitting with a friend in Soho at a stupidly early time to be sitting in a pub in Soho. As we talked about why we were both skiving off work, and about India, where my next adventure is going to take place and where she lived for a time, I saw a man get out of a taxi with two lime green suitcases with blue straps across them that were identical to each other. My friend and I talked some more. A man in his 60s had been sitting across from us drinking beer from an old-fashioned glass mug on his own. He’d finished his second glass and started shuffling his things about. Taking a piece of paper from a pocket, he placed it under his mug and started toward the top of the stairs that lead down to the toilets. I thought this strange and stood up to take a look at the paper... 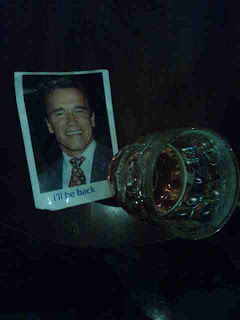 ...it had a photo quality photo of Arnold Schwarzenegger on it and underneath was typed ‘i’ll be back.’ Nobody else noticed. It made my day. And then I thought back to a couple of things I had saved –

As I exited an underground station, someone stood on the loose pavement slab I was standing on, causing it to lift a little and giving me a free ‘ride.’

On the Bakerloo line, an elderly man with a friar’s bald spot sat with his last two long white hairs raised by the breeze running through the carriage.

At Waterloo station, a Jamaican man in his 40s was wheeling a trolley around M&S. The trolley contained old framed portraits. There were colourful signs attached to the side of the trolley. Shop staff approached the man. He smiled and said ‘wagwan wagwan?!’ several times. Then, ‘I’m going to a party!’ Every single member of staff was smiling as I left.

A man standing in the gardens of a council estate block on a hill was wearing a kilt with traditional socks as he sheared the plants at the edge of the grass.

And so, I don’t know how regularly I’ll write, and it’s true that I’m only writing now because the internet is broken in my house and the only thing to do is write. But we’ll see. I hope I will.
Posted by SoMiraculous at 08:09 No comments:

I'm standing in the crush of people on the central line tube train toward Bond Street. Someone is holding a newspaper in front of them. The headline reads, 'Better to kill too many than not enough.' It relates to the horrific massacre in Norway in which a far-right extremist shot almost 100 people he accused of being 'multiculturalist traitors.' They were teenagers on a Labour Party summer camp.
I turn my head away from the direction of the paper and look through the glass I'm pressed against. A man is sitting on a seat with his little son. The man has gelled blonde hair and wears a yellow checked shirt. He's covered in tattoos, some of which look hand-drawn, which makes me think perhaps he did them in prison. All the tattoos are black outlines, faded to green. On his kneecap is written, 'SEX + DRUGS' with a wonky star underneath it and beneath that is written, 'BEER.' There is a nasty scar on the side of his knee that looks like the result of an accident which has taken some of the muscle there away. I move my eyes to look at his arms, which also have deep, long scars on them. They create spaces between tattoos of skulls and the name 'Maria.' I move my eyes to his neck and spot an England flag. 'Here we go,' I think. There is a large N next to the flag and just as I'm thinking perhaps it stands for 'Nazi,' I spot some writing on his wrist with a symbol which looks as if derived from the Christian fish symbol. 'White power,' it says. I look as his beautiful son, whose skin is untainted and hope that the tattoos on his father are from a past he cannot erase, but has forgotten.
Posted by SoMiraculous at 06:19 No comments:

It rains. What could have been the wind through trees is not. There's no movement and leaves droop with the weight of water. An oversized mac and impractical shoes, leaking onto semi-socks trudge. Trudge, trudge, trudge. Underground with wet knees and toes, umbrellas folded pass. Drips fall from lips and noses. Sit. Each person after falls heavily into empty space and sighs. Rain in June again. Wet through again.
Posted by SoMiraculous at 16:59 No comments:

I'm a bubble. Held in the air in a place with no atmosphere, spinning on an axis, tripping on the stars, occasionally I fall, and rest on rivers, borrowing more than a cliche. I'm an instrument. I feel like a projector. An aged projector which pulls up the wrong images in a presentation which has taken many hours to put together. I'm a flutter. I'm the wings of a moth beating and beating and beating. Coated in camomile, hair done up and I'm bent around my words. I'm a thesaurus not alphabetised. I'm a forcefield. Shattering metaphorical glasses with my fingertips. I'm a pianist with a keyboard instead of a piano. Making letters not notes. Building with them. Putting letters into words, tap, tap, tap. Sliding words into sentences, tap, tap tap. I float on paragraphs on seas of pages, a solid hull to safe-glide through the emptiness. An oil lamp in my hand. A blanket of belief around my shoulders, soft.
Posted by SoMiraculous at 08:45 No comments:

The bus stop crowd sighs as an empty 31 rattles past on the Camden High Road. When the next arrives, the people-mass is twice as large as it would've otherwise been. I wait for everyone to board before eying up the top deck and taking my own chances. At the last minute upstairs a seat up-front becomes available. I sit down. How privileged I am to get this view of the throng of red car lights illuminated against the black night. To see the the people outside the clubs having a good time from this height.
Then the guy across from me pipes up. A big, bald Jamaican guy with a leather jacket and fingerless biker gloves.
"Artificial intelligence. All of you young people with your internet and your mobile phones. You're not human, you're artificial intelligence," he repeats over and over again to the window in front of him.
The man beside him widens his eyes and shrinks against the window.
The bus slowly progresses to the end of the High Road, at which point our biker says, "come out, come out, wherever you are. Who stole my youth? Who stole my youth? Be it on tube, bus, plane or train, come out, come out." He repeats this line over and over before a few more choruses about artificial intelligence.
The shrunken man catches my eye in the window reflection. He looks a bit scared. I shoot him a sympathetic glance.
At last we pull into a bus stop and with the entire top deck now watching, the biker stands up and, as he turns to leave, mutters, "Fucking two-legged wankers."
Posted by SoMiraculous at 12:26 1 comment: Posted by SoMiraculous at 09:18 No comments:

These people read my blog